It's time my lovelies!!!

The fourth annual Witches in Fiction party has begun! And as per usual, I'm a little late to the party... but at least this year I'm getting my post in on the proper day! Ha!

If you haven't been over to Magaly's blog, Pagan Culture, click HERE and you'll find yourself there.

A wee story that's been kicking around in the back-most attic of my imagination... most notably every time I make coffee and my coffee pot steams and hisses and growls when it's just about done. I don't have a title yet, and I might write more, I don't know. But enjoy this little tidbit!

Lightning forked through the sky, illuminating the room through the filmy curtains. It was followed a few seconds later by a long, deep roll of thunder. The cat sleeping on the back of the couch stretched, arching her back, then jumped down onto the belly of the woman sleeping on the couch, then onto the floor.

“Umph,” said the now-awake woman, as she turned a half-hearted glare at the cat, “Was that really necessary? You're not exactly light you know.”

The cat just looked at the woman with her large yellow-green eyes, yawned and walked the rest of the way to her food dish, before turning back and looking expectantly at her.

The woman sighed, “There's still kibble in there... finish those and I’ll give you more.”

The cat waited, staring... she almost looked as if she'd cocked an eyebrow.

“Fine, have it your way,” the woman said to her cat as she got up and poured more food into the dish. “Such a finicky cat...” and then she smiled as the cat wound around and through her legs in a 'Thank you' before heading back to her bowl to eat.

The woman, whose name was Maggie, looked at the green numbers glowing from the clock on the stove: 05:59. She groaned; it was way too early to be up since she had a full day of clients ahead of her. She flipped on the kitchen light and began rummaging through the cupboard filled with boxes and tins of tea.

She pulled out some chamomile, fully intent on going back to bed after a cup, and as she was reaching for her tea kettle, another bolt of lightning flashed in the sky, followed by another growl of thunder. This bolt, however, exploded spectacularly as it made contact with something a few miles away... and Maggie was plunged into darkness.

She cupped her hands in front of her and called up a tiny ball of witchfire, just enough to see with. Then she walked around the kitchen lighting the candles. Soon the room was filled with soft, warm flickering light. She turned her attention back to the task at hand – making something warm to drink.

She decided that since she was up, and mostly awake now, she might as well get some work done. She could always take a nap later if she had to. She placed the tea back into the cupboard, having decided to make coffee instead.

Since boiling water on the electric stove was no longer an option, she went to Plan B. Still cupping the tiny ball of witchfire, she walked back over toward the cupboard filled with tea. This time, however, she opened the cupboard next to it and was greeted with the smell of good coffee beans and the tiny snores of the house's resident coffee maker – a small, kitten-sized dragon.

“Abelia,” Maggie said softly, “Abelia, I have a snack for you.”

Abelia opened one eye, then seeing the witchfire dancing on Maggie's hand, opened both eyes and stretched... quite similarly to the way the cat had stretched several minutes before. Abelia, however, didn't jump onto her mistress. Instead, she carefully rested her front claws on Maggie's hand and then delicately lapped at the witchfire until it was gone.

Then she began to purr, and a glow could be seen in her belly. Maggie smiled at the little dragon, “Will you make us some coffee, Abelia, pretty please?”

Abelia nodded then flew down from the shelf where she slept and landed next to the “other” coffee pot.

Maggie had a regular plug-into-the-wall kind of coffee pot that she used when she had guests, clients, customers, etc. over. She also had a coffee pot that had been passed down to her from her grandmother, who had created it with Abelia's help, to facilitate the making and drinking of coffee when electricity wasn't available – or when Abelia felt like making a pot for herself.

This coffee pot had been Abelia's idea, but she'd needed Maggie's Grandmother's opposable thumbs to bring it into existence.

Abelia loved coffee. It was her favorite thing to drink, and since all the women in Maggie's family, the ones since the invention of coffee anyways, had loved the brew as well, they were perfectly matched. Abelia figured out a way to brew a pot using her dragonfire, but since she was about the same size as a coffee pot, she really did need someone else to drink with. The witches of Maggie's family, and now Maggie herself, were the perfect drinking companions.

Also, coffee made by dragonfire gave back a bit of the energy to the witch that feeding the dragon witchfire had cost her... so it was a fairly equal exchange. Both giving and receiving each other's energies, deepening their bond and creating something that equaled out to much more than just the sum of its parts.

Abelia settled into her stone and cast-iron coffee maker and Maggie added the ground beans into their compartment, then added water into the compartment above the grounds. Then she stepped back.

Abelia's purr was louder now, almost a tiny roar. Then with as great a belch of flame as a small dragon could make, the water boiled and Abelia tipped the compartment so that it poured a little at a time into the ground coffee beans, then through the mesh bottom and into the pot below.

While Abelia was brewing the coffee, Maggie had collected her and Abelia's favorite mugs. She'd also cut the last of the bread she'd made two days before into slices along with some cheese and made up small plates for the two of them. Maggie cut some extra cheese for the cat, whose name was Crow, and then brought the plates to the kitchen table.

Abelia left her coffee maker and flew over to Maggie and perched on her shoulder. Maggie poured two cups of coffee and then added cream and honey to both before taking them back to the table and sitting down. Abelia flew to her seat across from Maggie and Crow jumped up to sit beside her.

After they'd finished breakfast, Maggie sat and sipped her second cup of coffee. Crow was curled in her lap and Abelia had draped herself about Maggie's neck and was snuggled beneath her thick, wavy hair, purring once again.

She visualized her day planner, which was in her bag in the living room, then called it to her along with a pen, a pencil and a notepad.

Maggie opened up the book and started going over her appointments for the day, making notes on the notepad about various things to do, gather, look up, etc. before each client would arrive.

The sky began to lighten as thunder continued to roll across it from one side to the other. Maggie continued sipping her coffee as she made out her To Do list for the morning, before her first client arrived at 10:30.

Since it was not quite 07:00 yet, she still had plenty of time. So she sat back in her chair to snuggle her dragon and cat, sip her coffee and watch the wind whip the Autumn leaves from the trees.

Today would be a good day, she could feel it in her bones. But then, any day that began with Abelia's coffee, followed by snuggles from both purring creatures was a good day.

She called the flickers of witchfire back from the candles and into her cupped palm, then closed her hand and absorbed the energy back into herself.

Crow yawned and stretched, then hopped down and padded across the floor to her water dish. Abelia snuggled deeper beneath Maggie's hair and smiled in her sleep.

Maggie got up from the table and crossed the kitchen to the dishwasher, where she placed their dirty dishes. She would run the thing tonight after dinner. Then she picked her To Do list up off of the table, scanned it one last time and then started getting ready for the rest of her day. 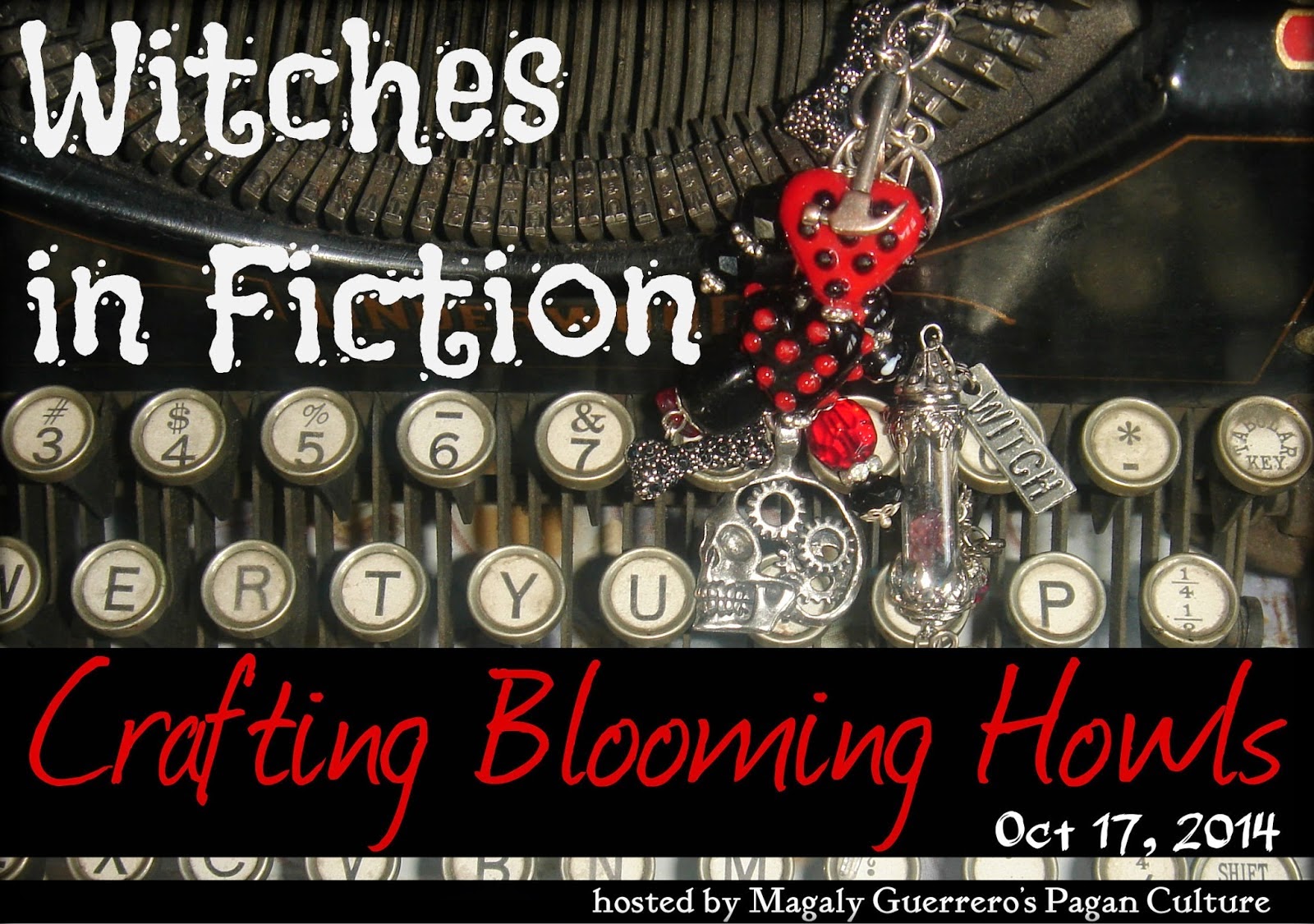 Click on the above pic to be taken to Magaly's blog and join in the partying! I hope you enjoyed my little tidbit here, and I can't wait to hop on my broom and visit the rest of Magaly's Wicked Darlings!!! See you sooooon!

XOXO
Posted by TheBlakkDuchess at 6:04 PM