Welcome to the first installment of my new weekly blog series, Wanderlust Wednesdays! Yes, I know it's technically Thursday now, but since I haven't been to bed yet, it's still my Wednesday. ^-^ 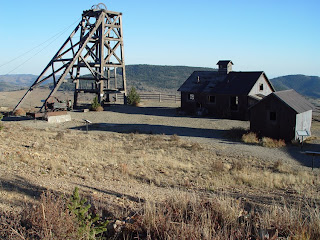 Since I currently don't have the means to do most of the traveling that I dream of doing, I'll take my weekly jaunts here for my enjoyment and yours too I hope. ^-^ 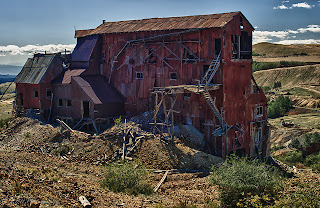 Today's trip is a super special one. We're headed to an old mining town in the Colorado Rockies... 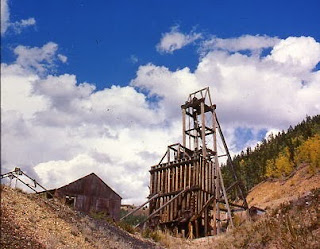 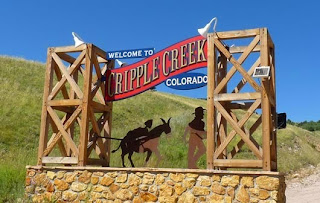 This former gold mining camp is located on the southwest slope of Pikes Peak. After gold was discovered there in the 1890's, the population jumped from a few hundred to around ten thousand in only three years.(1) 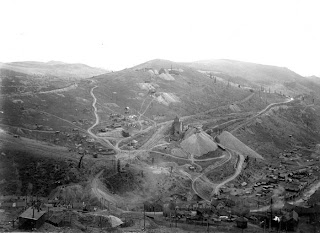 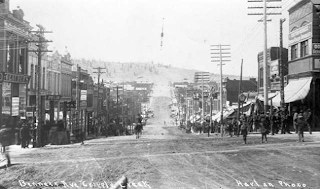 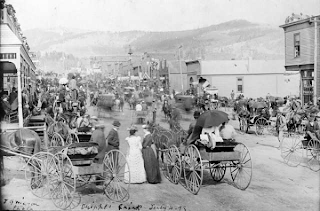 Since the early 1990's however, gambling has been the main tourist draw instead of mining.

There are still quite a few historic buildings standing, although most of them were rebuilt after the 1896 fire that wiped out all but about ten structures. The fire started in a brothel and since most of the buildings at the time were constructed of wood, the fire spread rapidly. Several buildings were blown up in an attempt to halt the blaze. (2)

On the bright side, when they rebuilt the town, they decided to use bricks instead of wood. 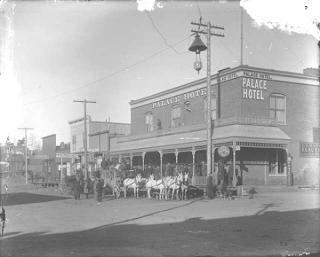 And the Palace Hotel as it was rebuilt after the 1896 fires, and how it looks today. 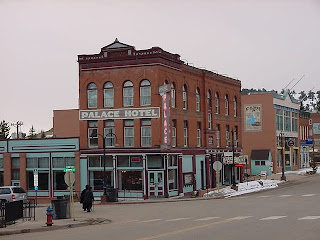 I've heard several stories from my parents, grandparents, aunts, uncles, whatever, as to how Cripple Creek got it's name. The first story I remember hearing was about how a prospector was leading his mule across the creek, when it stumbled, fell and was lame in one leg from then on.

Another story is that cattle ranchers used to lead their herds across the creek & enough cattle stumbled, fell and were crippled that the name just stuck.

The third story is by far the most involved... A man was herding cattle with a ranch hand, when they got into an argument & one of them shot the other with his pistol. When one of the cows heard the shot, they bolted across the creek, stumbled, fell and was crippled.

I'm sure there's at least several other stories as to how the town got its name, and I'm also relatively certain that they'll each involve some animal stumbling along the creek. Yeesh.

While I love the town itself, the real reason Cripple Creek is so special to me is that it's where my Bumpa and Nana (my dad's parents) had their cabin. ^-^

We would leave Denver and drive up to the cabin on occasion when we lived in Colorado. Once you leave the paved roads, the mountain roads all look something like this... 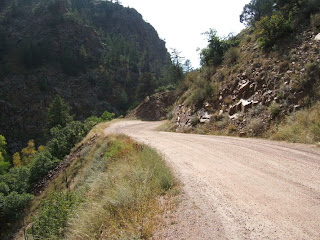 Winding, narrow, no shoulder, and with a totally gorgeous view. The crushed rock that lines the road is reddish-orange, and if you walk along the road and look down, you'll see tiny flakes of gold mixed in with the rocks and dirt. It's beyond beautiful. 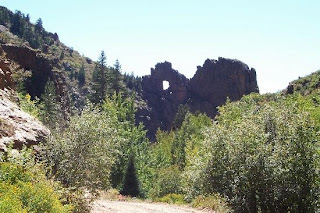 Once you got up the mountain a ways, you'd drive past the cabin that had caught fire and burned, destroying all the antiques it had been filled with. A few more twists and turns, and you'd turn right and drive down the steep driveway to the cabin. Once you pulled in to where you'd park your car, if you looked to the left, there was a hill covered in pine trees. If you looked to the right, there were two incredibly tall pines with a bar between them and a tire swing hanging from the bar. Straight ahead was the cabin, light yellow with brown trim. Up the three steps to the front porch & in through the front door. The kitchen was immediately to your left, and a small dining table and chairs to your right. next to the kitchen were the two bedrooms, and straight ahead was the bathroom (with its awesome claw footed tub) and the living room, which of course had a fire place. In between the dining area and the living room there was a door, which opened onto the enclosed porch.

Now the cabin was built on a hill, so the majority of the house was one story, but the enclosed porch was a story above the ground. On this porch were three twin beds and the most wonderful porch swing you could imagine. I spent a lot of time in that swing... ^-^

We could sit out there and watch the dear come and lick the salt licks my Nana left out for them.

As kids, we'd range all over the property, pretending to be miners or explorers or pioneers or who knows what. We'd hunt for gold and look for animal tracks.

At the cabin is where I learned to shoot a BB gun.

One time, my dad and I went for a long walk over the mountainside. We were going down a "short cut" he knew of, when suddenly he stopped on the insanely steep hill we were on & pointed up into a huge pine tree. Up in the tree was the biggest porcupine I have ever seen. We made a wide path around that tree, but it was still one of the coolest things I've seen.

Another time, while my dad was away somewhere, my mom took me, my brother and my sister up for a few nights. When we got there, she realized the power had been turned off, so all of the food in the freezer was rotten. She dumped it in the big trash can on the porch, and then heaved the outdoor umbrella stand for the picnic table umbrella onto the lid to keep the raccoons out. A few hours after she'd put us all to bed, she heard a huge crash from the front porch. She was terrified, because that umbrella stand had been so heavy, she'd almost not been able to lift it, and she couldn't think of what might have knocked it over. She peered through the blinds and saw a huge grizzly bear. She wedged a chair under the front door because the lock had broken and made it so the door didn't shut properly. She then went and closed the door to our bedroom and put the mattress from the other bedroom's bed in front of it. Then she turned out all the lights & watched the bear through the window, praying that it wouldn't lean against the front door & end up in the cabin with us.

Well, that bear was happier than could be with what was in the trash can. It came and went three times, each time taking some more food with it. That bear ate pizza, hamburgers, hot dogs and several fish. And it also tracked garbage about two miles across the mountain, which my mom ventured out the next day to clean up.

My siblings and I slept through the whole thing, and I remember being miffed my mom hadn't woken me up to see the bear. I was still too little to fully understand why she'd been so scared, but I also remember feeling sorry that she'd been so scared and all by herself all night. ^-^

She called my Bumpa up to fix the lock the next day... lolz...

Both my Bumpa and Nana have since passed away, and since none of the family members who actually live in Colorado wanted to keep up the cabin, they sold it. The day it sold, my heart shattered. I have never wished so much to have been able to buy something as I wished I could have bought the cabin. My mom felt the same way. She cried and cried, as it was quite probably her favorite place on earth.

Even though I'll probably never be able to go back and physically visit, I can walk the cabin in my mind and still feel the icy linoleum floors in the early morning light. I can still smell the smells that made up the cabin, and still feel myself swinging back and forth on the tire swing. I can hear the porch swing's chains creaking as I sit on the swing, cup of hot chocolate in hand.

This is also my safe place that I started journeying from in SouLodge. It was kind of funny to me, when I was trying to envision a place to start out from, a place where I felt safe and at home, that a cabin I haven't set foot in in almost two decades would come to me as that place. But it is indeed my safe place, and I'll never forget the little gambling town of Cripple Creek.


But more importantly, I can go visit my beloved cabin anytime I wish... all I have to do is close my eyes. 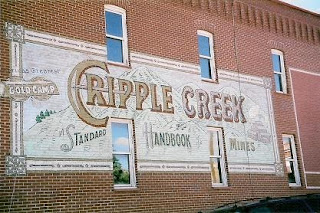 XOXO
Posted by TheBlakkDuchess at 4:59 AM