Howdy folks! Today I lounged around my house and did nothing but knit and read. It was glorious. I stayed up until 4am watching Game of Thrones, so I got up later than usual this afternoon. ^-^

That's the first show I've actually sat down to watch since Warehouse 13's first episode in July... which I haven't watched any more of & need to catch up on. Anyways! Back to crafty type things!
=D

I love to crochet. It makes me happy. Up until recently, I did not love to knit. I couldn't stop accidentally adding or dropping stitches & my tension was, well, deplorable.
Then I found the most beautiful needles I'd ever seen. I told Britt I absolutely had to have them, or else I would simply shrivel up & die.

Ok, I wan't really that dramatic, but you get my drift. They were gorgeous.

She told me I couldn't have them unless I was going to knit with them, and since I hated knitting, what was I going to do with them?

I promised I would learn to knit, and true to my word, I have. ^-^ I am so proud. I am no longer intimidated by using two needles at once. Someday, I will graduate to using several needles, and then knit socks.

For now, however, I am knitting a scarf for Britt. ^-^ Since she was nice enough to get me the pretty needles & help me find good beginning yarn (that was waaaaaaaayyy brighter & more colorful than anything I would ever have picked...lolz), I decided to make her a scarf. ^-^

So here it is... It's about a quarter of the way done, and I'm going to have to go buy another two balls of yarn I think... we like our scarves long in this house... short scarves just won't do. ^_~

It's an accidentally striped scarf, as I forgot whether I needed to knit or purl next & then picked the wrong one... and proceeded to spaz out... Britt told me to chill my pants and just pretend I'd meant to do it... and then keep doing it & it would look intentional. 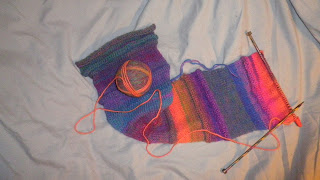 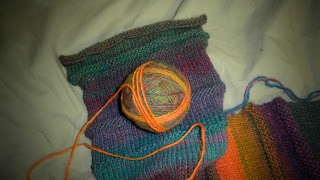 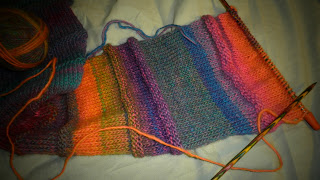 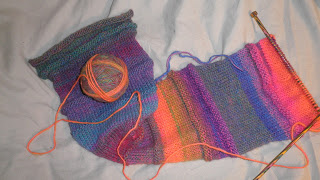 The good news is that I found my camera (yay!)

The bad news is, my apartment has... challenged... lighting, so the colors aren't quite as bright here as in person. Oh well... At least I found my camera! =D

Alrighty... Everyone have a glorious night, I'm off to knit some more.

XOXO
Posted by TheBlakkDuchess at 11:38 PM